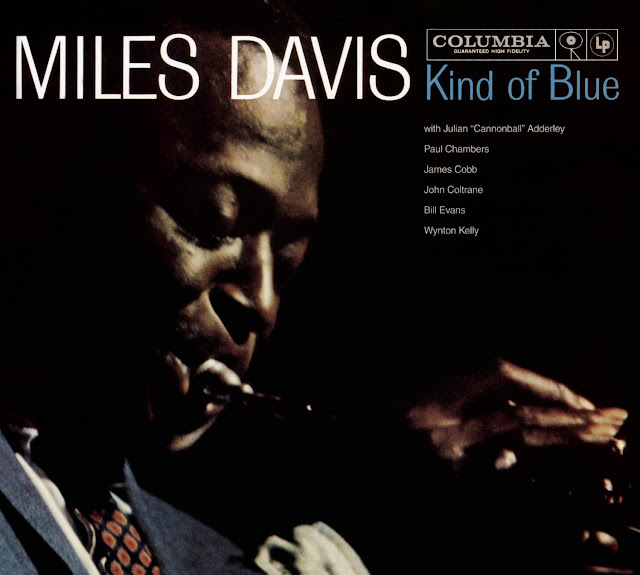 Trumpeter Miles Davis' 1959 album Kind of Blue is the best-selling Jazz album of all time and considered by many critics to be the greatest in history.  Let's examine its song titles and see how each one quite easily fits the parameters of Dreamtime Code, The Alphabet Conspiracy.  Only 5 songs, it is not a long process, and the ways which the titles fit the code are not tricky at all.  The most important tenet of the code is the "Rule of 3", the complete overuse of the 3rd, 6th, 9th, 13th, 16th, 19th, 23rd and 26th letters compared to all others.  The public opinion of the ideas which these "3" letters symbolize is thereby strengthened.

1.  "So What"
S.W. = 19-23
This title follows the “Rule of 3” because both words start with “3” letters.  S (19) and W (23) are among the strongest letters according to the code.  Basically, S (19) symbolizes Sex and W (23) symbolizes World and War.  Star Wars, the most popular film of all time, has these same initials and was titled with extreme purpose.  Combining letters strengthens the association of the ideas which they symbolize.

3. "Blue In Green"
B.I.G. = 2-9-7
Semantics and color symbolism add further ironic layers over the numerology.  A phrase like "Blue in Green" implies the strength of Green compared to Blue because Green is encompassing Blue.  Interestingly, the album's title also suggests a weak Blue: "It's kind of blue."  Alternatively, one could interpret kind as meaning kindness.  It that case, kindness is of blueness, implying a relationship in which blueness encompasses kindness.

The initials B.I.G (2-9-7) are immediately notable because they spell the common word.  Additionally, B (2) added to G (7) actually equals I (9).  The rapper "The Notorious B.I.G." spells out the same letters.  The film Big uses the same letters.  These example tell us that this group of initials correctly follows the parameters of the code.  Although the 7th letter G it is not "strong" compared to the left-sided "3" letters, it is certainly no less important.

Still confused?  Take a look at the Site Map and maybe something will attract your interest.  You now have the power of the code fully available.  The Illuminati think you aren't smart enough to understand the beauty of the code.  They are waiting for the point in history where the average person possesses the mental power to grasp the concepts which The Code puts forth.