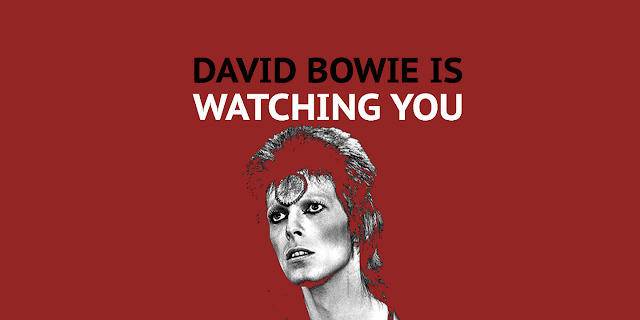 As one of the most famous men ever to live, David Bowie had a considerable amount of world influence during his long life in the spotlight of the stars.  Luminaries such as he were given access to all the things from which normal members of society are restricted.  Bowie once said "I think I've done just about everything that it's possible to do".  One must wonder why a rock star would be given such opportunities, if not for another reason.  Also, such a life is surely not possible without holding a few secrets.  Upon his death, it was almost like a prophesy fulfilled, as his image and likeness were plastered in reverence all over London and the world. Just like Big Brother from George Orwell's anti-utopian novel 1984, he was watching us all, through eyes of paint and cardboard.  Bowie was a Big Brother elected by the people, though the novel doesn't explain the despot's rise to power, of course.

This website exists to explain the Mass Media Alphabet Code, which has existed for the past century without the recognition of anyone not privy.  The code can be an endless puzzle, however the "Rule of 3" is most vital.  The majority of media titles only have initials of the 3rd, 6th, 9th, 13th, 16th, 19th, 23rd, and 26th letters, called the "3" group.  Consequently, the public opinion of the ideas which these numbers and their corresponding letters represent are strengthened.

David Bowie's 1970 album The Man Who Sold The World references "the man behind the curtain", he who runs the show.  Judging by his fame and fortune, that man very well may have been Bowie, for a period.  It is probably his most hard-rock work, so it makes sense that it consists of "3" initials because these are the left-leaning, sinister, earthly letters.  A softer sounding album would contain letters of the opposing group, such as E (5), G (7), L (12), N (13), O (15), Q (17), V (22), and Y (25).  This group is right-leaning, benevolent and celestial, so in the mass media code, it is marginalized.  After analyzing an album like this, a simple pattern should be apparent.  Most song title initials posses a 3 according to their place in the alphabet.  They are used in combination with letters which further strengthen this group, such as A, B, or T (20).

4. "After All"
Innocent looking alliterations such as these carry great weight.

5. "Running Gun Blues"
The only title which doesn't explicitly follow the "Rule of 3", R.G.B. moves to 18-7-2.  In the code, there are basically two groups, the left-sided "3" group and the remaining right-sided letters.  R and G are of the same right-sided group, opposing the "3" group, so their combination makes sense.  Because of titles like Reindeer Games, Gravity's Rainbow and Riding Giants, we can deduce that the combination of these letters follows the code.  If something is famous, then it is titled according to the tenets of the code.  We can then establish rules by simply viewing the titles of the mass media.
6. "Saviour Machine"
S.M., 19-13, again follows the "Rule of 3" by consisting only of letters whose place in the alphabet contains a multiple of 3.

The code is actually very simple, once it wraps around your head.  Understanding this information can expand your consciousness greater than it has ever been.  Don't just reject this theory because you don't understand it yet.  Give it a fair chance, read other articles on this website, and share.
Email ThisBlogThis!Share to TwitterShare to FacebookShare to Pinterest
Newer Post Older Post Home