NHL Teams All Have a Secret 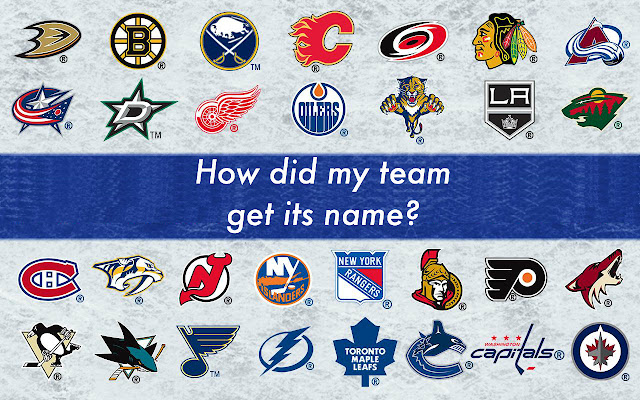 For the past century, a secret code has been used throughout all media, unnoticed by all but the Government, their members and minions.  The reason is that it is an enigma wrapped in a riddle, as the saying goes.  The truth is, once you see it, once you understand, it's elementary.  You need only be told of its existence to recognize its encompassing use in the contrived mass-media.  Now let's look at the teams of the National Hockey League and see the simplicity of the code in action.

These 5 teams contain only the first few letters as their initials.  Many sports team names have initials of just the first few letters, which makes sense because the very idea of sports projects the the ideologies of these letters.  In other words, the first four letters are symbolic of the same ideas as sports.  These team names also follow the "Rule of 3" because they are the combination of the primary catalyzing letters A (1), B, (2) and D (4) with the "3" letter C (3).  The remaining team names exist to the trivialize the code and complicate its usage:

Ottawa Senators: O.S. = 15-19
Vancouver Canucks: V.C. = 22-3
Edmonton Oilers: E.O. = 5-15
Lastly, consider the three other Canadian NHL teams.  The code is written so that movies, albums, slogans and concepts market an image.  Canada is a place very different from America, less war-mongering, more peaceful and, well, French.  The ideals which the Media-Government want projected from these localities are generally more conservative than their American counterparts.  So, it makes sense that each of these names contain one left-leaning "3" letter and another "right-sided" letter.  They are all 1 away from a team name that might occur in America: 16-19, 23-3, and 6-16.


Be sure to look at analyzation of NFL, MLB, NBA, and WNBA team names, as they are so widely used and universally recognized that their manner of fitting the rules of the Code is simple and apparent.  Besides sports, the code is used in literally every opportunity, including products, stores, videogames and movies.
Email ThisBlogThis!Share to TwitterShare to FacebookShare to Pinterest
Newer Post Older Post Home