Kabbalah and Gematria Wisdom for Everyday 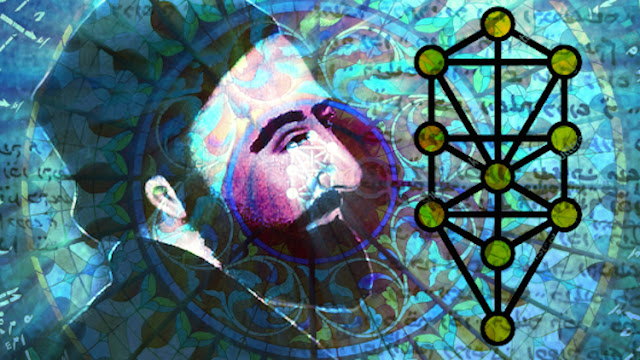 Rabbi Isaac Luria (1534-1572) is the founder of modern Kabbalah, which is most simply defined as the mystic tradition of Judaism, ecstatic prayer. The chief text of this esoteric practice, the Zohar, first mysteriously appeared in 13th century Spain. According to legend, Luria's father was visited by the prophet Ejilah, who told him that his son would build upon the understanding of the Torah and Kabbalah. After a period of intense meditation and worship, Luria moved from Cairo, Egypt, to Safed, Israel, a center for Kabbalah studies. There, despite not writing any of his teachings, he established a pedagogical legacy which is still perennially reaped.

Numerology is a central concept to Kabbalah studies. The 10 Sefirah of the Sefirot, the “Tree of Life” pictured above, represent an intangible idea, the 10 manifestations of the Creator, which one may somehow occupy while traveling to this realm. There are 22 paths which one may take in their journey from the first, Malkuth, to the highest, Keter. It is not coincidental that 22 is also the number of Hebrew letters. Every letter of the Zohar is meant to possess an individual character which reveals an even greater meaning. In Hebrew, numbers are indicated by letters, so numerical analysis is natural. Gematria, etymologically related to "Geometry", refers to the numerological study of holy texts.

Consider the Universe as existing amongst an infinite amount of individual struggles. The struggle between East and West, between Left and Right, between Yin and Yang, between 1 and 2, and between 9 and 11, between Red and Green, they are all dualities. Kabbalah is the culmination of centuries of arbitration to accurately present universal existence as the relationship between not just two, but the ten fundamental forces, each of the Sephirot. The universe is made up of 10 forces, but there are dualistic relationships between each of these. The numbers 6 and 7, for example, are two of the Sephirot upon the Tree of Life. Each are individual and distinct entities. 6 is a multiple of 3, and part of the so-named "Number of the Beast", while 7 is often revered as holy. If 7 is related to the Godly, then 6 would assumably be related to comparably more Earthly ideas. The identities of 6 and 7 also correspond with their respective letters, which are F and G. The application of Kabbalistic numerology across the entirety of the global entertainment industry is intended to endow English with the same numerological holiness present in the Hebrew language, or utilize that which it already contains. According to the usage of this modern media code, F (6) most often precedes G (7) in the Universe.

That adjacent letters prefer to ascend rather than descend is a rule that is followed in the mass media’s usage of the code. An important assertion about the relationship between these two Sephirot is being made by consistently placing F (6) before G (7). Each of the Sephirot corresponds to a number, so 6 and 7 can be aligned with Tiphereth and Netzah. As ascribed by 16th-century Spanish Kabbalist Moses ben Jacob Cordovero, Tiphereth and Netzah are two of the “conscious emotions”, beauty and eternity. Combining them in this way so often creates a universe where the bilateral relationship between these Sephirot is not at all equitable. The modern code often follows the same form of combining initials of adjacent letters in alphabetical order: Home Improvement, Indiana Jones, Reel Steel, Radio Shack. To combine adjacent letters in reverse alphabetical order would be contrary to the force created by the above titles, although it is unclear whether one of the pair is simply being ascribed more power, or that perhaps the preponderance of these examples is meant to correctly reflect the universal temperament, rather than work against it. This order indeed seems sensible considering that the Kabbalah’s Tree of Life is upwardly oriented. Adjacent initials in reverse alphabet order do occur, however much less frequently, seemingly in order to maintain a tenuous balance and to illustrate that the Tree of Life is not a task, with the crown Kether as the objective.

The Sefer Yetzirah, the earliest known book on Jewish mysticism, is a tremendously concise text. Traditionally attributed to the Biblical Abraham, it predates the Zohar and describes the creation of the universe by letters and numbers, 32 path of wisdom, consisting of the 22 Hebrew letters and 10 numbers. The number-letter code used modernly in the mass media utilizes the English alphabet in a manner similar to how Kabbalah utilizes Hebrew. Like the modern code, the author also divides his Hebrew alphabet into three distinct groups. However, unlike the modern code, which does so based on the numerical value each letter, the Sepher Yetzirah’s author provides less explanation for each letter’s specific classification. Aleph, Mem, and Shin, letters located at the beginning, near the middle and end of the alphabet, are the “mother letters”. Bet, Gimel, Dalet, Kaph, Pe, Resh, Taw, letters which can make two sounds, are the 7 “doubles”, the only group for which the author provides a specific trait to delineate their classification. The remaining letters, He, Waw, Zayin, Heth, Teth, Yodh, Lamedh, Nun, Samekh, Ayin, Tsade, and Qoph are the 12 Elementals.

It would seem natural to attempt to acquiesce the Hebrew and English alphabets in order to assess the parallelisms between The Code’s organization and the author’s view on the creation of the universe. The first half of the Hebrew alphabet seems to match somewhat with the first 11 English letters. Alef and Bet align with A (1) and B (2). Dalet, the 4th Hebrew letter, with D (4), Kof, the 11th Hebrew letter, aligns with K (11). To assume that the letters lying therein also align is hopeful, yet plausible. The second half of the Hebrew alphabet, beginning with Lamed, Mem and Nun, also aligns with the English, L (12), M (13), N (14). The 15th Hebrew letter Samech does not align with S (19), however it does visually resemble the English letter O (15). After this point, the trail connecting the Hebrew and English universes is unfortunately lost. The P sound is made by the 17th Hebrew and 16th English letters. Resh, Shin, and Taw align with R (18), S (19), and T, (20) however their alphabetical placement differs. They end the Hebrew alphabet, however in English they only begin the end. The inability to directly align the Hebrew and English alphabets is especially frustrating because the author’s parallelisms are so specific. The author equates each of the 12 Elementals to the 12 signs of the Zodiac, the 12 months, and the 12 body parts. The 7 doubles the author equates to the 7 days of the week. The mother letters, Alef, Mem and Shin, which the author identifies as Water, Air, and Fire, seem to align with A (1), M (13) and S (19), however the numerology is confused because Shin is the 21st Hebrew letter while S is the 19th English letter. It would seem mathematically incorrect to apply directly the same attributes to the English alphabet as the author does to Hebrew, if the alphabets do not completely agree.

We can however attempt to extrapolate parallelisms without aligning letters specifically. The author makes a number of assertions about the nature of the universe based on a 22 letter alphabet. According to the author, the Lord created the universe in 32 mysterious paths of wisdom, calculated by adding the number of Sephirot (10) to the number of letters (22). Assuming the number of Sephirot to still be 10, adding our 26 letters would mean 36 paths of wisdom in our realm. Unclear is it how universes differ based on the number of paths of wisdom. In the 22-letter Hebrew alphabet, 231 “gates of knowledge” are created through the number of combinations of one letter to another. In our 26-letter English alphabet, there are 325 possible combinations of the same type. A larger amount of “gates of knowledge” existing in our universe compared to the author’s is appealing, however does not prove an expansion of awareness which it may suggest to some. The gates are not units which measure the universe’s maximum amount of knowledge, but literally doors which one enters in order to travel towards to same goal, which is enlightenment of The Creator. Upon the Tree of Life, like a map, the 10 Sephirot are connected by 22 paths, each a Hebrew letter. As a map indicates, the number of routes accessing locations varies. The first Sephirah, Malcluth, connects only to Jesod, via the letter Tet. Conversely, 8 lettered paths lead to the 6th Sephirah, Tiphereth, or away from it toward other Sephirah. In a universe created by a holy 26 letter alphabet, 4 additional paths would be available, however it is unknown which Sephirot they might connect. Ours must be a completely different universe because it is being created through different letters which are combined according to different principals. Our realms must come as a result of much more than just the number of paths of wisdom in which they were created. Not just their alphabets, but their respective rules of grammar and syntax differ greatly, suggesting a schism between the rules by which the universe of their creation operate.

As with the Hebrew language, the letters which make up English words can be representative of the word itself. English can be studied in the same way. For example, “six” is notably just one letter different from “sex”. Conversely, “seven” is notably similar to “heaven”. S (19) and I (9) are part of the left-sided "3" group of letters because their position in the alphabet contains a multiple of 3. X (24) acts as a catalyzer because it basically symbolizes ideas related to the infinite and permanent. Conversely, S.E.V.E.N. is S (19), then letters from the right-sided group: E (5), N (14) and V (22). So, 6 is left-sided and 7 is right-sided, even in the way each is spelled. The principals which Kabbalists use to study the layered ironies with the Zohar apply to English, also.

16th-century Rabbi Abraham Azulai wrote the following: “The basic levels of Kabbalah must be taught publicly to everyone young and old. Only through Kabbalah will we forever eliminate war, destruction and man's inhumanity to his fellow man." The Numerological Code applied in the mass media is a covert operation designed to subversively introduce and indoctrinate the entire planet to the truths of Kabbalah. When a sufficient portion of the population has harnessed the power it contains, world peace will be an inevitable conclusion. The secret code used across the entire worldwide mass media was invented in order to indoctrinate all of humanity into the basic levels of Kabbalah subliminally, without their recognition. Learning how the code is organized from this source will teach you what you already know. The internet is the tool which will empower the people to learn this information for the first time.
Email ThisBlogThis!Share to TwitterShare to FacebookShare to Pinterest
Newer Post Older Post Home