How to Open Your Chakras Despite Hollywood 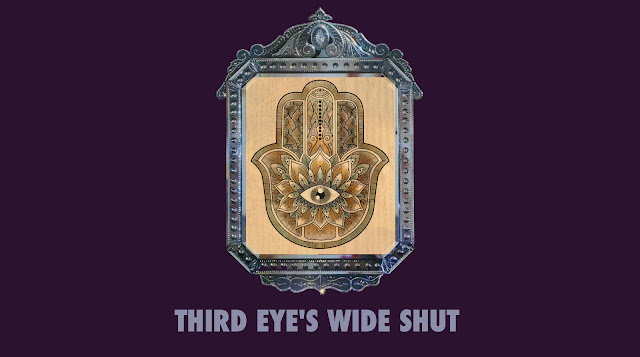 The "Third Eye" is what man uses to imagine.  We all have one, although it may not be plainly visible.  Every time you envision a possible event of the future, you are seeing through it.  Every time you visualize a place, real or imagined, at which you are not currently, you are seeing through it.  Every time you feel something with your soul and not your body, you are not using your sixth sense, but your third eye.  When you are asleep, dreaming, you see through neither your left nor right eye, but the other.  Looking into the eyes of those you love, you are using all three.  The Third Eye is our gift of humanness.

Recently, much has been made of awakening the Third Eye, healing it, utilizing it.  Physiologically, it has been linked to a part of the brain called the Pineal Gland.  Many have theorized that world governance is want to discourage the development of this specific body part in the general population, and according to them have poisoned our water supply with fluoride, a compound which apparently works to calcify and disrupt its operation.  Regardless of the veracity of these claims, it is perhaps likely that a world of pupils with fully functioning Third Eyes might be considered dangerous to those who wish to control and lead us.

If the Third Eye is tantamount to a measure of one's universal sensitivity, then limiting total public knowledge and awareness may work in ways more effective than any physiological sabotage.  The less one knows, the less one is able to feel.  Intuition and instinct become attenuated, man loses its humanity and descends into mindless, animalistic, random behavior.  Consequently, a cache of important knowledge has been kept secret, inaccessible to the public, in order to limit their greater understanding and impair the function of each individual's Third Eyes.

Stanley Kubrick is among the great American film directors.  He is also theorized by some to be the director of the allegedly faked moon landings of July 20th 1969, a conspiracy theory of unknown veracity.  Kubrick's film titles are prime examples of the organized and systematic Mass Media Alphabet Code, a conspiracy theory which is visibly true.  This secret has elapsed over an entire century, and Kubrick's films span nearly half that.  The Code's most important tenet is the "Rule of 3".  Basically, the vast majority of all mass media titles use the initials of "3" letters, those whose order in the alphabet contains a multiple of 3: C (3), F (6), I (9), M (13), P (16), S (19), W (23) and Z (26).  This "3" group of letters is also used with the catalyzing group, which includes A (1), B (2), D (4), J (10), K (11), and T (20).  Any title containing only "3" letters and catalysts follows the "Rule of 3".  It may seem incredibly simple, but this single rule has been used so pervasively throughout the world that it has had a tremendous affect.  Looking at the his entirety of Kubrick's career, the initials of his films read like a poem, and exhibit the code's use well.

Day of the Fight (1951)
D.F. (4-6) follows the "Rule of 3" as the combination of catalyst D (4) and "3" letter F (6).  Moreover, D.F. simplifies to 2/3, or .666 repeating.  In reading the code, the first initial can divide into the second. The words "of" and "the" are not included in the reading of the code in this case.  Mathematically speaking, the word "of" literally means to divide.  "15 of 20 batters reached base", for example, means 15/20.  So, inserting the word "of" between two words reinforces the existence of a fraction between the first and second initials.

Killer's Kiss (1955)
Because of his last name, it is appropriate that two of Kubrick's earlier films use the K initial.  K (11) is a powerful letter, symbolizing uber-perfection, the next level above J (10), which symbolizes a benevolent perfection.  Both this and following film's use of "kill" is thus rhetorical subterfuge.

The Killing (1956)
T.K. equals 20-11, the combination of two catalyzing letters which strengthen whatever they encounter.

Paths of Glory (1957)
P.G. equals 16-7.  This is a initial pairing supported by the media, otherwise the film rating "PG" wouldn't exist.  16 and 7 are not divisible, so the fact that the word "of" suggests a fraction is not an issue.  The word "of" also suggests that a greater power lies in the second initial, which is G.  Paths of Glory is an attempt to tell the story "P of G", the meeting of two contrasting ideologies.

Lolita (1962)
Considering the film is about an alluring girl, this title seems appropriate if we break it apart letter by letter.  L.O.L.I.T.A. equals 12-15-12-9-20-1.  L and O are feminine, right-sided letters, not part of the "3" group.  Each letter is assigned a basic symbolism by identifying the most important, commons words which begin with the letter.  L (12) symbolizes ideas such as Like, Love, Lust, Learn.  O (15) basically stands for Origin, Oval, Orgasm.  Films are representations of the symbolism of their initials, or in the case of single-word titles, letters.  The Kink's "Lola" is reminiscent.

Dr. Strangelove or: How I Learned to Stop Worrying and Love the Bomb (1964)
The basic title, D.S., follows the "Rule of 3" as 4-19.  D (4) acts as a catalyst for the "3" letter S (19).  Semantically, the name of the titular character is meant to subversively, openly, associate strangeness with love.

2001: A Space Odyssey (1968)
An enigmatic title because of the inclusion of a number, which should attract immediate attention.  A.S.O. is an interesting letter group equaling 1-19-15.  In all instances, the initials of a film are meant to portray the ideologies of the film itself.  2001 is an exceptionally artistic film, contrary to something more mainstream which would likely follow the "Rule of 3" more simply.

A Clockwork Orange (1971)
Many people questioned the author of the book which this film was based on about the origin of this phrase, which he seems to have fabricated despite claiming it was used locally.  Of course, the code is the answer.  A.C.O. equals 1-3-15, which suggests E (5) created through ratio.  These three letters, in this sequence, are what this film portrays.

The Shining (1980)
Titles which start with "the" trivialize the simplicity of the code.  Most of them simply partner the catalyzing 20th letter T with a "3" letter, which is in this case the important S (19).

Eyes Wide Shut (1999)
This title, like many others, subtly references The Code, and how it works to close the eyes of perception.  E.W.S. (5-23-19) is interesting because it almost follows the "Rule of 3", besides the E.  If we consider that a film represents its initials, it makes perfect sense.  E (5) symbolizes Energy, Escalate, Elevate.  It is the letter whose power the world Illuminati attempt to control entirely.  W (23) is also claimed by the Media-Government because it symbolizes Winning, Want, World.  S (19) is another very important "3" letter which symbolizes Sex, Super, Strength.  The subject and themes of this film are present in the initials of its title.

A.I. : Artificial Intelligence (2001)
Not directed by Kubrick, but conceptualized, this title is an obvious use of the code because it is initialized.  A.I. is a common initial pairing which follows the "Rule of 3".  The letter I (9) is strengthened through combination with the primary letter A.

Besides the Alphabet Code, the concept of the "punchline" is another trick which the Illuminati have played on you for your whole life.  Consider this scenario.  You are watching a scene in a comedy show.  There are jokes thrown in all over the place, so you laugh here and there.  But the biggest joke of the scene is always the last bit of dialogue, right before the scene cuts.  You, as the viewer, have been trained to recognize this, so you expect to laugh the most as the scene ends.  This tactic has been used to make audiences laugh at things which are actually serious.  The most common examples are "Oh my God..." and "Jesus Christ..."  Some zany character does something stupid, then a straight-talking character utters these words, then maybe a laugh-track is thrown in, then the scene quick-cuts, signifying that now is the time to laugh the most.  By training the audience to laugh at the word "God", or saying the Lord's name in vain, the Illuminati are actually engineering popular opinion, separating believers of spirituality and religion from others.

In 19th century America, most everybody believed in God.  But by the next century, with the beginning of worldwide media propaganda, many people still believed in God while some abandoned religion.  Among the objectives of our 20th century media conspiracy has been identifying which population segments are genuinely neurologically and genetically attracted to religion, spirituality, atheism, or otherwise.  Ending a scene of dialogue with a quick-cut automatically evokes the feeling of a joke in the audience, so serious subjects and statements, like those referencing religion, can be effectively trivialized.  Depending on the personal psychological and physiological makeup of the audience member, the manner in which this information is processed will vary greater.  The masses have been subliminally differentiated into various extreme sides.

Kubrick's Dr. Strangelove is a quintessential film of the 20th century, filled to the brink with subversive references to the Alphabet code as well as the Illuminati control of the world.  In a climactic scene, Peter Sellers' character is trying desperately to learn a password, repeatedly called "the code", from George C. Scott's character.  Scott locks himself in the bathroom, then Sellers says "I'll try to guess what code is", then the sound of a gunshot is heard, Scott having killed himself.  In this immediate moment, the scene is dramatic, tense, horrific, terrifying.  A suicide was just witnessed by the viewer.  But then, a genius moment in propaganda history.  The scene quick cuts.  This effectively causes the scene to become immediately become comedic, which all at once trivializes the existence of the code, the tactic of quick-cutting to marginalize statements, and in fact, suicide.

Lastly we should recognize that "Stanley Kubrick" moves to S.K., 19-11.  K (11) strengthens the "3" letter S (19), thus following the "Rule of 3".  Of course, names are a different manifestation of numerology.  Parents name their children based on their subconscious understanding of the code.  The Illuminati title media based on conscious decisions.

Somewhat easy is explaining what the code is, but more difficult is explaining why the code is.  But, how could it not exist?  It is truth incarnate.  It is a tangible representation of the human condition.  It is poetry dissected.  It is nothing, and everything.  It has been the grandest experiments, and executed without expectation.  Why do they do it?  Because they can.  As Dr. Strangelove said, "It is not only possible, it is essential."
Email ThisBlogThis!Share to TwitterShare to FacebookShare to Pinterest
Newer Post Older Post Home