How Did the Alphabet Get Its Order? 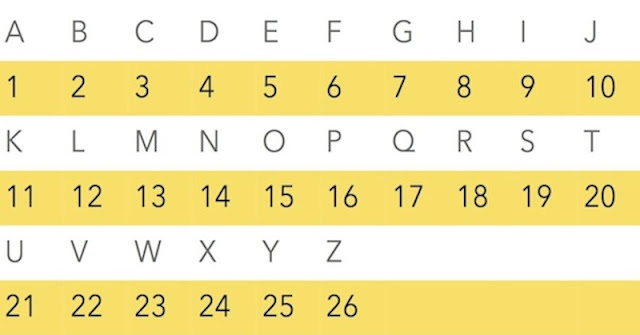 Across the entire entertainment and new industries, pieces of media are titled so that their themes are reflected in the initials of their title.  Since the "Rule of 3" is the keystone of the code, prescribing the letters of the "3" group strength, right-sided letters are relatively rarer, used only in situations where the media item in question is to represent the ideas of the right-sided group.  The difference between "3" letters and right-sided letters can fundamentally be compared to the relationship between male and female.  For example, Gilmore Girls, a program whose audience is mostly women, strengthens the right-sided letter G (7) through alliteration.  Mad Men, a comparatively masculine program, strengthens the opposing leftist M (13) letter.

The English alphabet has 26 letters which is significant as being just short of 27.  Consider it two groups of 1 to 10, and a third group of 1 to 6.  The 11th letter and up possess their own characteristics, but are also just the next iteration of the letter which is 10 less.  For example, the 14th letter N is possessing of all the characteristics of the number 14, but also has shares traits with the 4th letter D and the 24th letter X.  The "Rule of 3" is a simple arithmetical concept, but ignores the fact that each letter and its corresponding number represent different ideas, based on their timeless numerological symbolism.  The easiest way to understand a number-letter's "personality" is to think about the most important, common words which begin with that letter.

A (1), K (11) and U (21)
It is no coincidence that Alpha, meaning exemplary and outstanding, begins with the letter A.  A is Alpha, it is symbolic of a singular excellence.  It's not G-7 Steak Sauce.  It's A-1 Steak Sauce.  K is the next iteration of that idea.  K represents an uber-perfection, the next step above the 10th letter J.  J can be seen as a benevolent level of perfection whereas K is over-perfect.

U (21) is a letter used carefully and sparingly in western media.  It is symbolically related to ideas such as Unity, Union, Universe, Unit.  S, (19), T (20), V (22) and W (23) are all much more powerful as the code is presented.  The Illuminati want our world at present to be one in which these letters are more popular, so that the ideas that they represent are more widely held.  The ideas which U represent will eventually be given back their due importance.

B (2), L (12) and V (22)
If we live in a world where the "3" letters C (3), M (13), and W (23) are the strongest, then a world in which the "2" letters B, L and V were the strongest might just be a beautiful utopian vision.  B basically stands for Binary, meaning two.  In modern days, the word Beta has negative connotations because it is used to mean a rough draft.  But B is very important, if only because it takes 2 people to have L.O.V.E. (12-15-22-5).  As you can imagine, the second letter carries immense importance and power.  A and B are "primary letters", they strengthen whatever they are placed next to.

L and V are both right-sided letters.  L (12) is heart-shaped, most simply standing for Love.  It's no coincidence that it begins the words Like, Learn, Listen, Live, Love, Lore, and Long.  V (22) is the next iteration of L, related to idea such as   Vagina, View, Voyage, Vast, Venerate.  The similar shapes of capital and lowercase B, L, and V are not coincidental.

C (3), M (13) and W (23)
The "3" letter groups, those whose place in the alphabet contains a multiple of 3, are the strongest as used in the code.  The 3rd letter C is related to the triangle and the trinity, symbols of power.  M stands for Man, which is in a constant struggle with the 7th letter G, which stands for God.  This is perhaps the best way of explaining why the "3" letters clash with the remaining letters.  The Illuminati want Man to be stronger than God.  Not necessarily in a bad way, they want people to realize that they have the power to change the world, rather than seeing themselves as pawns of a much higher God and immobile fate.  So, they pit the "3" terrestrial letters against the other side consisting of celestial letters.

W is an extremely important letter for the Illuminati members themselves.  More than anything else, W stands for World, War and Winning.  The Legionnaires see themselves as the perennial victors in every war, hence their affinity with the ideas which W represents.  The song "Strawberry Letter 23" is about the 23rd letter W.

D (4), N (14) and X (24)
In some ancient numerology systems, 4 is a number related to evil ideas.  It is no coincidence that D (4) begins the words Damn, Devil, Demon, and Death.  Many mainstream scholars agree that in the Biblical passage describing "40 years of wandering the desert", forty is not meant to be quantitative but instead descriptive.  The number is an adjective basically meaning "really bad years".  Increasing the number by a factor of ten strengthens the intensity of what is being described.  "4 years" would mean "bad years", as "400 years" would mean "really, really bad years".  The 4 Biblical horsemen of the apocalypse like make sense.

N (14) however may not be so evil.  In Asian numerology, even numbers are considered lucky.  If the 13th letter M stands for Man, than the 14th letters N could either stand for Neo-man, the next step of Man, or it could stand for women.  Either way, N (14) is a letter given less strength in the media in comparison to the letter it follows, M (13).

X (24) is a letter of immense power which is hard to describe, but is comparable to ideas relating to infinity, forever, and permanence.  Consider "Professor X", The X-Files, The X-Factor, "Xfinity", "X-Wing" (Star Wars), or XTC (a  hugely popular band).  Also consider X in Roman numerals translates to 10.  DX is a common combination of letters as an abbreviation for "Deluxe".  In the code, the an initial can divide into the next, if possible.  Since D is 4 and X is 24, the ratio created between these letters is 1/6, strengthening the F (6) the same way that Almost Famous does, by pairing F with the primary letter A.

E (5), O (15) and Y (25)
E represents Energy, Elevation, Escalation, which explains the importance of the Pentagram in the occult and other mythologies.  It represents a force vital to the universe, so its ownership is disputed.  The Legion would prefer to keep it all the themselves, so they disenfranchise it in the media.

O symbolizes Origin, Orgasm, Oracle.  Like E, it is a right-sided letter with a great intangible elegance.

The letter Y has a similar feminine mystic quality.  It's sometimes even used to basically represent womanhood itself.  For example, there's a scene in The Office where Stanley suggests a paper for women, and without any explanation calls it "papyr".  Jokes like this are how the media subliminally trains the public in numerology while simultaneously marginalizing it.

F (6), P (16) and Z (26)
The Illuminati Alphabet comes down to these letters which contain multiples of 3 in their alphabetical order.  F stands for Fun, Fuck, Fame, Fate, Fat.  P stands for Penis, Phallic, Pulse, Party.  The White House's address is an inside joke: 1600 Penn.  Z means the end.

G (7) and Q (17)
G means God, Great, Good.  Q would be the next iteration of this idea.  Notice their similarities in shape.  The magazine GQ and film Galaxy Quest show that letters having the same units digit are commonly paired.

H (8) and R (18)
As the next step above the Godly 7th letter, the words that H stands for the most are High, Heaven, and Hope.  R symbolizes Royalty and Regal.  H and R are also commonly paired together because they contain the same units digit: Houston Rockets, "Holiday Road", Hot Rats, Red Head.  H is also often used in combination with the 12th letter L to create the ratio of 2/3, or .666.  For example, The Hurt Locker.

J (10) and T (20)
J (10) symbolizes an benign level of perfection.  This is something that almost all people are already consciously aware of.  A perfect ten.  Thus, so many first names begin with the letter J, in order to work in conjunction with the remaining initials of a person's name to give them identity of personality.  For example, consider a person of the initials J.G. as contrasting with a person of initials J.P., due to the intrinsic difference between 10-7 and 10-16.  The former would lean towards the right-minded and the latter towards left-minded.  The words beginning with J which best personify it include Justice, Join and Job.

T (20) is the next iteration of perfection symbolized by J (10).  It is no coincidence that Time, Trust, Task, Temper, Torture, Terrific, and Terror all begin with the 20th letter.  Another word which represents the symbolism of T (20) well is Train.  Not "train" as in the moving vehicle on tracks, but "training", the act of practicing a skill with the goal of improvement.  It is also beauteous how T.R.A.I.N. (20-18-1-9-14) seems to correspond with the definition of the word.

The ideas represented here are part of the collective human consciousness.  These truths are the same in Hebrew, the same in Greek.  They are universal, a part of each and every one of us, of our timeless being, our souls.
Email ThisBlogThis!Share to TwitterShare to FacebookShare to Pinterest
Newer Post Older Post Home