This All Happened While Everyone Watched the Game 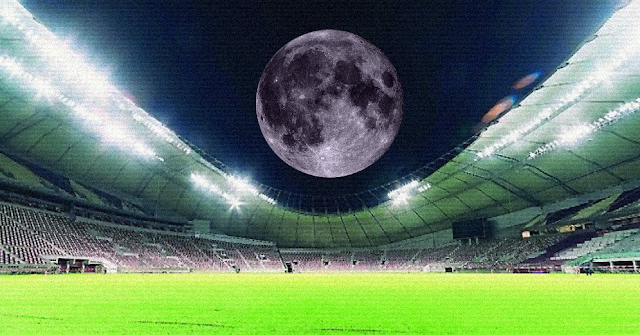 Sports should be responsible for a large portion of the joy that many get out life.  The excitement that athletics give people cannot be replicated.  It's pure ecstasy, losing oneself in the tensest, most physical and trying moments.  That is to say, playing competitive sports should do these things.  Watching competitive sports, conversely, is an exercise in living vicariously, investing one's own thoughts and energy into the actions of others whom could often care less about those watching them.  Through the idols much of the public worships through the television and in the arenas, many indirectly measure their own success and happiness.  Debating sports is a similarly banal waste of time designed for chronic arguers, those wanting to assert their ability to think critically who are not ready to converse about something more important.  Still though, sports on Earth inspire us to do our best, persevere and overcome, all while following meticulously observed rules set upon by a righteous governing body which must be obeyed.

First-century Roman commentator Juvenal, whose name ironically translates to "juvenile", was nonetheless wise when he said that "bread and circuses" keep the public satisfied and pacified.  He was referring to Gladiator events like those which took place in the Colosseum, violent spectacles intended to entertain and sufficiently stoke their violent sides into smoldering away.  Ancient despots would become jealous at seeing the global effects professional sports leagues have upon today's empire.  Televised sports are used by the governing class to distract the public away from ideas which actually deserve attention, the most important of which is the calculated and systematic conspiracy enacted by the elite against the people. The Illuminati brandish this conspiracy in the form of a secret code, hidden in plain sight.  Because the public fails to recognize this consistently repeating pattern, their ability to recognize the obvious connectivity of the world's great secret society is likewise hampered.

All professional sports teams are titled according to this secret letter-number code. The code's main "Rule of 3" is pretty simple.  The vast majority of the words of titles begin with the 3rd, 6th, 9th, 13th, 16th, 19th, 23rd and 26th letters only, used in combination with themselves, and strengthening letters such as A, B, D, J (letter 10), and T (letter 20), which prescribe them power.  The remaining letters are consequently disenfranchised and the ideas which they symbolize lose relevance.  All of the team names of the prominent American sports leagues, the  NBA, MLB, NHL, and NFL fit the code.  Now, in order to better understand this code, let's look together at each of the 12 teams of the WNBA, the Women's National Basketball Association, because their use of this secret code is so brazenly obvious.

Chicago Sky and Connecticut Sun
These teams have the same initials and follow the "Rule of 3".  The 3rd and 19th letters used in conjunction in order to imply a strong bond and intrinsic strength.

Indiana Fever
The combination of the 9th and 6th letters also follows the "Rule of 3".

Phoenix Mercury
The combination of the 16th and 13th letters also follows the "Rule of 3".

Seattle Storm
The 19th letter alliterated follows the "Rule of 3".  Same as the Seattle Seahawks, Sounders and Supersonics.

Washington Mystics
W.M. (23-13) is so obvious, it's offensive.  This team is located in the capital of the country which gave birth to the code.  "Rule of 3".

New York Liberty
Okay, now let's get weird.  Don't let these confuse you.  There must be examples like this to make the code a challenging puzzle to solve.  Analyzing the code's methods is just a matter of using one's best logic.

Minnesota Lynx
There is a fascinating dichotomy which can be observed in the titles The Lion King and The Little Mermaid.  If we temporarily ignore the T (20) of "the", the boys film is L.K (12-11) and the girls film is L.M. (12-13).  So, they both start with L (12), with the boys film descending while the girls is ascending.

Additionally, consider each individual letter of the word "lynx".  The code revolves around initials, but really every letter of every word counts, especially in shorter words.  The group L.Y.N.X. (12-25-14-24) is fascinating because it seems to have the same basic structure as "New York Liberty".  As explained above, Y is substituted for M, which would naturally fall in between the 14th letter N and the 12th letter L.  The exact same thing is happening with "lynx", however L and N have switched sides, and there is an X at the end.  The X, as with "the" in The Little Mermaid, has the affect of switching the order of the existing matrix.  In the same way that M.L. (Minnesota Lynx) has the same basic meaning as T.L.M. (The Little Mermaid), L.Y.N.X. ("lynx"), will result in a similar neurological response as N.Y.L. (New York Liberty).  X and T have the "switching" effect because they are catalyzing letters, neither left or right sided.  A (1), J (10), and Z (26) would have the same effect.

It's a terrible tragedy that the code is used to regulate the strength of the people because it truly represents something beautiful, the heavenly mathematics of the universe.  For some names, especially those that adhere to "Rule of 3", the reason for particular initials is obvious.  Others require deeper examination. The great thing is that we can be sure that every title is decided upon with extreme purpose, by those member to the secret society with no name, known to the public as the Illuminati.  For the code to effectively work its magic on the masses, it must be as detailed as possible, down to every letter.  It's really an amazing thing to behold, like a wonderful vision.
Email ThisBlogThis!Share to TwitterShare to FacebookShare to Pinterest
Newer Post Older Post Home