Did Nostradamus Predict The Matrix? 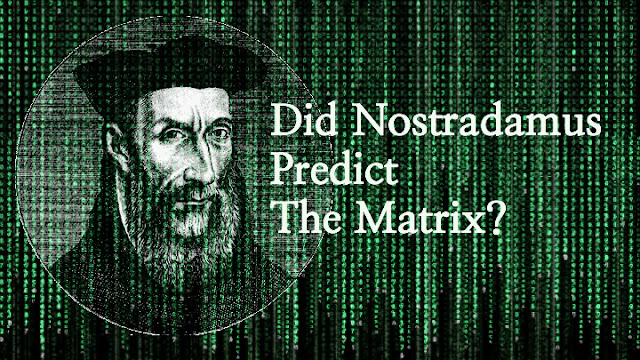 If you are a writer, and you want your work to last forever, or at least millennia, there seems to be a single assured method of obtaining that goal.  Simply write something of truth which will resound forever, or in other words, something which cannot be wholly proved or disproved.  Regardless of the truth contained within the stories of the Bible, Torah, Quran, and Book of Mormon, the earthly permanence of these works seems to have been established by perpetual argument.  Each is known to be total fact by some, and complete fiction to others.  Never will either group be able to present any evidence that proves their beliefs beyond a doubt.  These works will live forever because someone will always see something true in them.

The trait that each of these texts share is that they are presented as histories, things that happened already.  Religious skeptics believe their writers used this to their advantage, stating as fact events which may have never occurred.  People of the time may have had no reason to think otherwise.  Since then, however, much of the truth of these texts has been proven incorrect or impossible.  Any supposed history looks increasingly ridiculous as time expands infinitely.  Time grants us the gift of hindsight, or at least a grander knowledge of history.

Nostradamus, the French future-teller of the 16th century, may have found the most ingenious way of writing a work of unending truth, solidifying his literary legacy forever.  Instead of writing a specific, fantastical story of the past, which would gradually be proven false, he wrote a poetic, reasonable history of the future, whereby its interpretation can expand slowly.  It is a system which benefits the verbose clairvoyant.  The more poetic the prophesy, the less specific the claim.  It is unfortunate that Nostradamus is not widely read purely as a poet because of his poor reputation as a prophet.  His work seems like that of a poet in disguise, offering predictions in stanza form which seem more like memories permanently floating in space.  His writing is floral, beautiful, and teases the imagination into denying its veracity.  Nevertheless, without need he often mentions specific years and figures.  He may have been prudently planning.  If a specific date is mentioned, a whole wave of attention is paid to his work during that time to assess its relevance.  If it cannot be proven that a prophesied event did not in fact occur in this way, then the tide of interest continues, magnified.  If a specific figure is mentioned, then it can be compared endlessly to real world examples.  If it can’t be proved to what Nostradamus is referring, than it can’t be proved he was incorrect.

The world of today is often compared to a Matrix, an invisible grid which we live in and don’t recognize.  It would be fruitless to find excerpts attempting to prove that Nostradamus predicted the rise of The Matrix, the curse of media evil cast upon the world during the last century.  Nostradamus created his own Matrix, a vision of reality which will exist forever on the planet invisibly.  Nostradamus cast a permanent spell on the planet by submitting to the world a great work of epic poetry, which also purports to chronicle the events of the future, in language which guarantees it cannot be entirely unsubstantiated.

The centralized global mass media works with the same magic, creating the future by broadcasting a fake image of humanity which is unavoidably imitated.  Nostradamus is a single author whose work is specifically supposed to predict the future.  With control of the entire lexicon, the global elite gained the power to control the future by presenting whatever version of life they pleased.  By tricking the people into thinking media was the genuine result of uncoerced individuals, they could present a version of reality which seemed a legitimate representation of real life.  The Matrix is the alternate version of reality broadcast worldwide, which many or most of us accept as real.  This wouldn’t have been allotted existence had it not been for the cloak created by the Illuminati Alphabet Code, something that has been a living thing for an entire century.  The Code's most important idea is the "Rule of 3", the vast overuse of initials whose order in the alphabet contains a multiple of 3.  This group is used with catalysts A (1), B (2), J (10), K (11) and T (20). The Code is ubiquitous.  It's literally everywhere, films, books, magazines, slogans, and the products you use everyday:

The reason that all of these products follow the code is that they are all controlled by the Illuminati/Freemason power structure.    All mass-produced product names follow the code.  If a brand name doesn't use the "Rule of 3", then it is utilizing the complexity of the code is some other way.  The Code and The Matrix are everywhere together.  If you want to leave The Matrix, then you have to learn how to see The Code, and deny the Illuminati the power to control your future.  The Code is a living thing which must be recognized in order to be controlled.  Like the Holy Texts and Nostradamus, it may live forever because the force of its truth cannot be ignored.
Email ThisBlogThis!Share to TwitterShare to FacebookShare to Pinterest
Newer Post Older Post Home