Albert Pike: What is G to a Freemason? 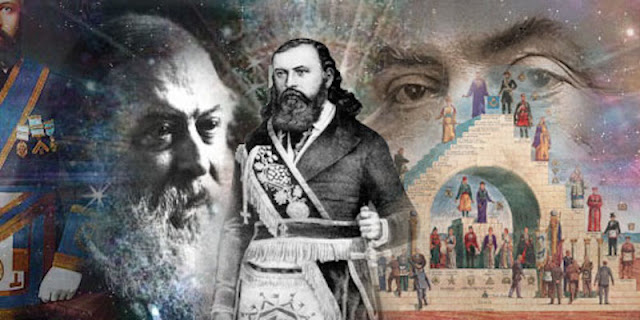 The Freemasons have no official slogan or motto.  On their official crest, there are no words.  Instead, there is just a single letter, G.  It is often guessed what its significance is, whether it stands for God, Good, Great, or something else.  What is really stands for is all of these ideas.  At the same time, it doesn't really stand for anything but itself.  The letter G is significantly the 7th letter in the alphabet, and the number 7 is almost universally recognized as relating to Godly ideas.  The letter G thus represents the same vital force in the world, which Freemasons hold to be worth admiring.  Every letter possesses an individual and distinct personality, related to its order in the alphabet as well as the most common words which begin with that letter.  The 6th letter, F, would ironically never be in the Freemason insignia because it signifies ideas related to the number 6, and words like Fun, Fast, Fuel, Fame, Fortune, Fake.  The 7th letter G is instead the beacon which Freemasons choose to live by.

Among the upper echelon of Freemasons are people who truly understand the grander significance of this idea, which can be called a code.  These people are aware that this code has been applied across the centralized entertainment industry for the past century.  Each of these people is a conspirator, complicit in a lie of deception levied upon the people.  In order to subversively program the population, M and G are two letters commonly paired as initials in the global mass media.  Each letter possesses an intrinsic symbolism related to the most important words beginning with that letter, so M (13) stands for Man, Machine, Might and Muscle, while G (7) stands for God, Good, Great and Gain.  The frequent combination of M and G suggests a correlative relationship which the Freemasons wish to support.

Because every letter has its own symbolism, every person can be represented somewhat accurately by a letter.  Two letters combined would represent that person more accurately, as would three, and so on.  The legendary American Freemason Albert Pike seems like a good representation of GM. Consummately active, a soldier, attorney and writer, he possessed the qualities embodied by this pairing of letters. The God-Man once wrote "Philosophy is a kind of journey, ever learning yet never arriving at the ideal perfection of truth."  The Freemason Letter Code is a like entity, a never-ending maze of knowledge which leads to nowhere, which is actually a very special place.

GM and MG represent the vital universal relationship between Man and God.  Until the turn of the last century, to say that God was within Man, that Man and God are comparable or interchangeable, was heresy and blasphemy, against the general teachings of most every religion.  Man was an entity lesser than God, almost in the way that an animal compares to a human.  Since the ever-important 20th century, however, a popular notion has arisen that Man and God are not so separate as previously taught.  This is an idea which was spread by the the people, but also by the propagators of ideas who are called the Illuminati.  These people work to reflect in the media the consciousness of the people, thereby creating a dream-reality.  Our current times are an important step in the evolution of humanity, when it finally became appropriate to market a mass media which empowered the people, rather than God.  Though everything is a dream created by the Illuminati, the world is now also of the people.  The combination of M and G represents the coalescence of Man and God, a point in time during which their trajectories intersect.


Intrinsic to the Alphabet Code is the "Rule of 3", the over-abundant use of "3" letters as initials, those containing a multiple of 3 in their place in the alphabet: C (3), F (6), I (9), M (13), P (16), S (19), W (23) and Z (26).  These "3" letters are given strength by being paired with themselves, as well as strengthening letters A (1), B (2), D (4), J (10), K (11) and T (20).  The remaining letters are differentiated as weaker because they are used much less frequently, only in combination with themselves, and not with the strengthening letters.  In contrast to M.G. (13-7), M.F. (13-6) is another pairing of enormous weight which follows the "Rule of 3".  The Illuminati are trying to create through their mass media people who are blissfully numbly happy, so to combine M, representing Man, with F, representing Fun, makes sense.  However, the M.G. pairing is perhaps even more common than M.F. because the statement it makes is even more important.  Every piece of media is meant to represent its themes within its initials.

Other material on this site will explicate better what this is all about, starting with the Site Map.  If you've read most of the text here than you now have a pretty good understanding of how this all works.  Social media is the tool which will enable this timelessly important idea to be disseminated to the people for the first time in history.
Email ThisBlogThis!Share to TwitterShare to FacebookShare to Pinterest
Newer Post Older Post Home