Holy Trinity Hidden Throughout All of Existence 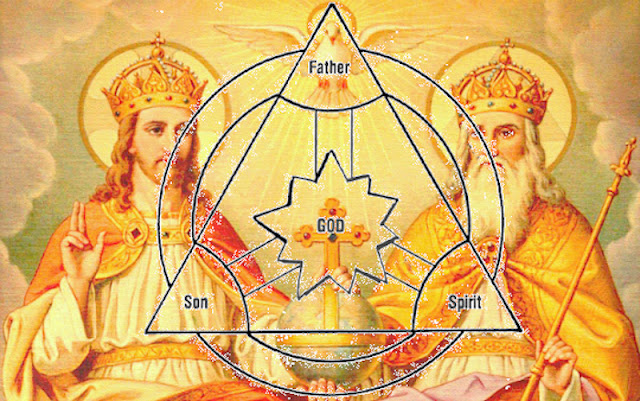 Regrettably, language can never represent exactly what occurs in the mind.  It can merely act as a tool used in attempt.  A great many of the world’s problems have resulted from the frustration of being unable to express ourselves as we wish.  Humanity has devised manifold languages of varying grammatical structures and syntax, all of which attempt the same thing, lucid communication between individuals.  It was plainly decided that the more words were available for usage, the more accurate they would be in representing our feelings.  Unfortunately, without a uniform education system, miscommunication may have consequently become even more rampant, as some groups developed ways of thinking based on words to which others had not yet been introduced.  Language is at once the solution, and the problem.

Word association has an incredible strength in modern society.  When concepts are constantly used in combination, they create a bond which exists regardless of their actual relationship.  For example, if the title of the world's most popular film consisted of two wholly unrelated entities, to the public these ideas would nonetheless become interweaved.  In the schema which organize thoughts of the mind, it is most common for words to be associated which bare some logical similarity.  Red is associated with Blue because they are both colors.  Flute is associated with Piano because they are both musical instruments.  Circle is associated with Square because they are both shapes.  Other times, conversely, words become associated because they are practically opposites.  Night and Day, Good and Evil, Black and White, these pairs are as closely related as two concepts can be, despite their contrary natures.  Unfortunately, language has endlessly trained the human mind in this way, and pairs of concepts are treated as of the same group or dualistically opposed, either the same or different.  Language has taught humanity to think as simply as possible.  Presented with two things, they are either with each other, or against each other.  It is therefore possibly a worthy exercise for humans to associate words of absolutely no relationship with one another, to assert that they are neither intrinsically similar nor total reversals.  Because the human mind enjoys new ways of thinking, we find humor in phrases which frivolously pair unrelated subjects.

If asked to complete the phrase "the holy...", many would submit the word "trinity", meaning something having the state of three.  These words have had a dependent relationship for many generations.  The concept of holiness has thus become associated with the concept of three.  Rather than logically conclusive ideas like Church, God or Heaven, we have been programmed over centuries to finish that phrase basically with a number.  Moreover, of any number from 1 to 10, the number 7 has classically been treated as the most holy, for whatever reason.  To replace 7 as the holiest of numbers with 3 has had metaphysical repercussions globally, intangible as they may be.  To the Christian of many different denominations, 3 is the holiest of numbers, and to espouse it might work to bring about conversion, revelation, or even the return of Christ.  The elite Christians of the world, with the cooperation of other Abrahamic monotheists, have secretly instilled the Holy Trinity throughout the world, in the names of the companies which they own and control.  This secret “code” follows something appropriately called the “Rule of 3”, the prevalent use of letters as initials which contain a multiple of 3 according to their place in the alphabet: C (3), F (6), I (9), M (13), P (16), S (19), W (23), and Z (26).  This “3” group of letters is also used in combination with letters which further strengthen the trinity, A (1), B (2), J (10), K (11) and T (20).  To the true believer, holiness is everywhere, in all things, all people, all places.  It connects us all, though we cannot see it.  "The Code" is meant to reflect the sanctimonious unseen force of God.

If any one number can have an intrinsic symbolism, then all numbers must also by extension.  For example, in both the Eastern and Western worlds, the number 7 is commonly understood to symbolize God.  It's hard to understand why, though.  Based on simple Platonic logic, we can establish that numbers do correspond to ideas, and that numerology is real.  Which number is more symbolic of God, the number 666 or the number 777?  Most people would say 777, because 666 is widely know as the "number of the beast", the devil's number.  Which number is more symbolic of perfection, 10 or 5?  Most people would say 10.  The fact that this results from our Base-10 mathematical system is irrelevant.  Which number is more indicative of being a leader, 1 or 2?  The answer is of course 1.  Over the course of our human history, each number has attached itself to a personality.  Across many cultures and mythologies, abstractions like numbers, colors and shapes share traits, exhibiting the invisible force which connects us all.  Disparate populations share opinions about intangible concepts which have much in common.  If there was not truth to these baseless guesses, then every culture's beliefs would be random, completely different and opposing.  Instead, in many instances they are basically the same.  This gives credence to the beauty of our shared humanity.

It is possible that scientific study could illustrate empirically the symbolism embodied by each number.  A simple experiment could show that numbers illicit emotions.  Present a subject with 6 balls, 6 strings, 6 bowls, 6 pens, or make them do an action 6 times, while measuring their neurological and physiological outputs.  Then, do the same thing with 7 items, or actions.  Analysis of the variance between the subject's reaction to different number of objects or actions could exhibit the physiological basis for numerological mythology.  The Illuminati are, more than anything, scientists.  Indeed, these type of experiments have been performed for decades, in secret.

Because the alphabet is so deeply ingrained in every English speaker, numbers and their corresponding letters will illicit the same neurological response in the subject upon which they act.  Every literate person knows the alphabet's order.  Every person through osmosis memorizes these 26 items which they encounter all day long.  When someone hears A, they think 1.  When they hear B, they think 2.  And so on, all the way to Z, 26.  It does not matter if a person isn't consciously aware that, for example, K is the 11th letter.  They are aware of it subconsciously, and their neurological response will reflect that.  The human brain is capable of billions of operations and memories.  When letters are presented, they might as well be their corresponding number, and vice versa.  That's the strength of The Illuminated Alphabet.

The presentation of "The Code" in languages which utilize non-Roman alphabets complicates the matter.  It is assured that the code is present in all international mass medias which use our same letter system, such Spanish, French, German, Portuguese or Swedish.  The mystical symbolism of each letter is the same throughout.  However, because the Illuminati want each country to have its own unique personality, the code is utilized differently depending on location.  In America, the "3" group of letters is given strength because they want our country to be instilled with the traits of these letters.  Perhaps in other countries, the other letters, such as E (5), G (7), L (12), N (14), O (15), Q (17), V (22) and Y (25), are given more power because their symbolism better represents the personality of that locale.  Like the Holy Spirit, the Code is a magnificently beautiful concept, endlessly deep and unknowable, yet worthy of contemplative meditation.
Email ThisBlogThis!Share to TwitterShare to FacebookShare to Pinterest
Newer Post Older Post Home