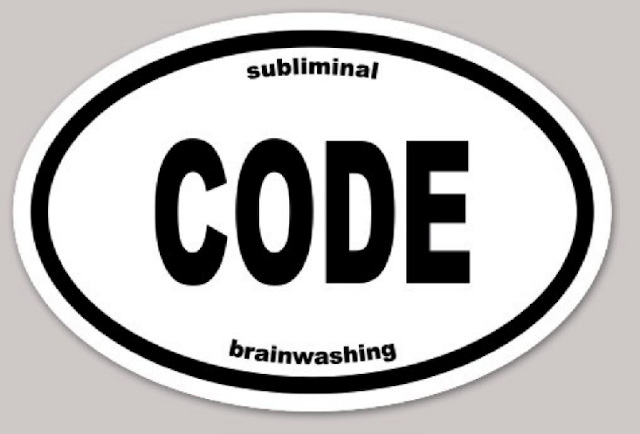 If you live in America, or elsewhere, you have probably seen these stickers with various initials representing places or things placed on cars.  These are based on government placards which were used in Europe to differentiate countries.  Popularized by a decision of the Illuminati, they exist to trivialize the existence of the Secret Mass Media Alphabet Code.  Products like these stickers exist to confuse the masses, numb them to the power of letters and numbers.  Normal folks are only subconsciously aware that the code is an endlessly beautiful puzzle.  By advertising it themselves, they become a part of this maze.  It's almost a unknowing show of reverence, their wanting to be involved in the secret language which the royal class of the underworld comprehends and authors. The code is like music, it's both a science and an art.  It is concrete and visible to the eye, but really, it is beauteous and untenable.  "The System", which propagates the code, exists for benevolent reasons, to bring our humanity towards something resembling Utopia.  Additionally, however, it's an evil lie, a sinister mean-hearted trick selfishly meant to exploit.  The "ends" will hopefully be blissfully amazing, but the "means" cannot be accepted, this terrible amalgam of sabotage and treachery.

"The Code" is based on the simplest form of numerology.  First, establish that the letters of the alphabet correspond to  numbers based on their position in the alphabet, so A, B and C equal 1, 2 and 3, etc.  Next, all pieces of mainstream media are titled in order to represent themselves in their own initials.  For example, Star Wars is meant to represent the symbolism of the letters S.W. (19-23), Star Trek is meant to represent the symbolism of the letters S.T. (19-20) and Harry Potter is meant to represent the symbolism of the letters H.P. (8-16).  The mass media is written collectively, so that nothing widely released strays away from the general themes intended by its authors, the secret society known popularly as the Illuminati.  Because an precise attitude, or worldly perspective, pervades the entire media, a specific pattern of titling mass media pieces also persists throughout, called the "Rule of 3".  Basically, a disproportionate amount of mass media pieces utilize in their titles "3" letters, those which contain a multiple of 3 according to their place in the alphabet: C (3), F (6), I (9), M (13), P (16), S (19), W (23) and Z (26).  The Illuminati want to strengthen the people's opinion of the ideas which these letters represent.  They do so by releasing films, television shows, books and broadcasts which are titled using these letters as initials and represent their respective ideas.  Unnoticed by almost all, it has the effect of entirely altering the consciousness of the people.

The Code is a tool which the Illuminati use to subversively program the masses in order to accelerate towards their end-goal.  In order to protect the secrecy, strength and validity of this tool, they trivialize their own existence and the code's.  This tactic comes in many forms.  A film like Wag The Dog (W.T.D. = 23-20-4), for example, in which a fake war is created in the news in order to ensure a candidate's election, trivializes how the Illuminati control the news, by making the audience marvel at something which to them is impossible.  In reality, the film is not far at all from the actual truth.  The audience is thereby trained to laugh at something which is in reality very serious and very real.

Another example of trivialization is The Aristocrats, both a classic joke framework and popular documentary film surrounding the joke.  By popularizing a joke whose punchline is a word which basically means "the ruling class", their existence is made comedic and marginalized.  The sad truth is that all of the "comedians" interviewed in the film are in fact luminaries themselves, members of this exclusive club, and privy to the historical importance of this "joke".  Even more sad is that the beloved children's film The Aristocats exists for exactly the same reason.  Everything released through the mass media, from the most random children's show to the biggest film, is written, titled and released to serve a purpose, which is not to entertain, but program.

A popular "indie" novel and film titled Everything Is Illuminated exhibits how a statement being made trivializes a statement not being made: "Everything Is Illuminati".  The title means that "everything is explained", but because it is only one letter different from this alternative sentence, the more important statement loses meaning and validity.  Everything is Illuminati, and this title illustrates its reach.  In regards to the alphabet code, E. I. I. (5-9-9) doesn't follow the "Rule of 3", however is still worthy of analysis.  E (5) represents Energy and the Pentagram so it can be used to represent the Illuminati themselves.  I (9) can be used to represent the Universe.  E.I.I. is like all letter combinations in that it is open to interpretation.  The initials of a title are meant to represent the themes of the piece itself, as well as signify ideas similar to the actual words which make up the title.  So, E.I.I. in a way means just what it says.

Another method of trivialization can be termed "call it what it is".  Consider the popular comedy film Forgetting Sarah Marshall.  The audience thinks it has this title because of its plot, but it really it is because of the initials. F.S.M. (6-19-13) follows the "Rule of 3" as the combination of "3" letters.  Moreover, F (6) plus M (13) actually equals S (19).  Films like My Best Friend's Wedding (M.B.F.W., 13-2-6-23), Finding Forrester (F.F., 6-6) and Searching For Bobby Fischer (S.F.B.F., 19-6-2-6) also use this tactic, all of which follow the "Rule of 3" simply.  Dialogue from the comedy show Bored to Death cleverly trivializes the code in a different way:

Woman: You're the private cop?
Jonathan: Yes. Or detective. Or investigator. They all work.

The Alphabet Conspiracy revolves around the initials of titles, but actually the letters of almost everything matter.  The keywords of a line of dialogue, for example, can also become initialized and follow the forms of the code.  Consider the sentence: "I was going to go to the abandoned shack, but I ended up over at Hank's little ranch."  The keywords are the noun-phrases: "abandoned shack" and "Hank's little ranch".  So, if you hear this type of dialogue on television, consider the sentence "I was going to go to the A.S., but ended up over at H.L.R."  These two groups of initials are meant to be contrary.  A.S. implies supremacy because of A's proximity to the 19th letter S, while H.L.R. consists of two pairs of the ratio .666: H.L. = 8/12 = .666, and L.R. = 12/18 = .666. Dialogue from an episode of It's Always Sunny In Philadelphia illustrates this tactic:

The noun-phrases at work here are "sky scraper" and "postage stamp".  So, the sentence translates "I was as big as a S.S., and now I'm as tiny as a P.S."  S.S. (19-19) implies a strong supremacy, someone large and capable.  P.S. (16/19) conversely is related to .666 (6/9), suggesting a person lacking.  When Mac says "Oh, I get it, cute", he is actually referring to his prior clever word-play, effectively trivializing it.  In the superficial context of the show, however, he is referring to the next sentence about a pen.  By adding this short phrase following the subversive word-play, the writers numb any sense in the viewer that there was any inside joke which they may have missed.

The code has to be used in dialogue in addition to titles because if it is ignored, the truth of it becomes lost.  It must be omnipresent, a component in every shred of media which is released.  But don't let this investigation of rhetoric sway you from a basic understanding of how the code is used for titles. It's Always Sunny In Philadelphia is itself another example of the code's "Rule of 3".  I.A.S.I.P. (9-1-19-9-16) follows the "Rule of 3" as the combination of "3" letters I (9), P (16) and S (19) with catalyzer A (1).

Do you believe in Charity, Humanity, Justice, Freedom, Hope, Courage, Righteousness, and Equality?  If you do, as I hope, then help this cause, because this site is my attempt to forward these ideals.  The Civil Rights movements going on right now have been fueled by the Internet and Social Media, in addition to the proven methods of protests and legal action.  Contribute how you may, share the knowledge you have with those whom are available to you.
Email ThisBlogThis!Share to TwitterShare to FacebookShare to Pinterest
Newer Post Older Post Home