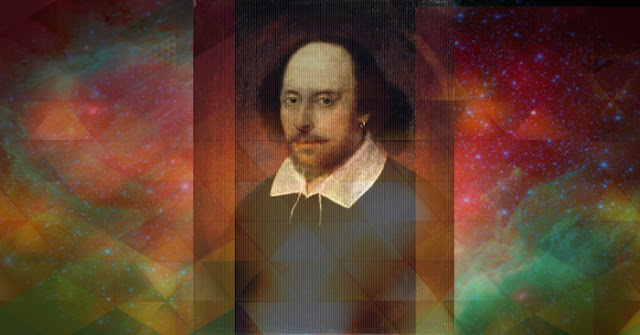 "What's in a name? That which we call a rose by any other name would smell as sweet."
Romeo and Juliet (1597) by William Shakespeare

One may wonder how the universe of William Shakespeare can exist.  Someone puts on a mask, and they're instantly unrecognizable.  Murders occur based on minor misunderstandings.  Time can even stop, so that one's emotions can be expressed directly to an audience that supposedly doesn't exist.  Folly is funny and tragedy the best, excruciatingly enjoyable.  Absurdity reigns supreme.  Shakespeare's world was a creation, a convolution, a misrepresentation of the real, true world which existed at the same time.  His audience was not given an accurate vision.  They were instead given a joke.  In this way Shakespeare was an early step in propaganda, a means by which a broad world view could be presented which the masses would consequently emulate.  Even centuries ago, there was a temperament which the ruling class wished to impart in proletariat.  Their means of obtaining that are the same now.  The public is bestowed fictional works which they do not suspect are uniformly designed to deceptively reflect incorrect skews of reality.

If a rose had another name it might smell as sweet, however might not sound it.  Hidden from public knowledge is the fact that language, words and names are the manifestation of the deeper symbolism contained within the entire alphabet.  Every letter and its corresponding number metaphysically represent ideas related to the most common, important words which begin with the letter.  For example, the words which R (18) stands for most are probably Royal, Reign and Regal, all kingly ideas.  O (15) is related to ideas like Origin, Oval and Orgasm.  S (19) is related to Sex, Super, and Strength.  E (5) stands for Energy, Elevate, Escalate.  Letters and numbers each evoke certain singular characteristics.  The beauty of a rose is seen in its letters.

It wouldn't be as sensible if the throned flower bush was called a "wamp" (23-1-13-16).  Not just phonetically, but also in terms of spelling.  Each person possesses a subconscious sense of aesthetic regarding letters.  W (23) is associated with ideas such as War, Want, World.  A (1) is Alpha, Amazing, Active, the primary letter which strengthens whatever it encounters.  M (13) is Motor, Man, Machine.  P (16) is Penis, Party, Pleasure.  The masculine, left-sided half of the alphabet possess a multiple of "3" according to their order.  "Wamp" contains W (23), M (13) and P (16).  The feminine right-sided group consists of the non-"3" letters.  "Rose" contains E (5), O (15) and R (18).  The word "rose" seems warm and romantic, while "wamp" is cold and lifeless not just because of our association of hard and softs sounds, but because of the numerology associated with the letters being spoken.

If the letter T was added to the beginning of the word "rose", making it "trose", the changes that this addition would enact further illustrate the lyricism present within every word.  T (20) is a strong letter, catalyzing whatever it is near, and stands for ideas like Training, Tough, Task.  Assessing any potential meaning is achieved by simply determining any mathematical relationships apparent through the numerology of each letter.  By adding T (20) to "rose", 18-15-19-5 becomes 20-18-15-19-5.  The numbers 20 and 18 are not divisible, so no significance lies there.  What we can identify is that they are neighboring even numbers, implying a relationship intrinsic to the letter which lies in between, S (19).

An alphabet code used across the mass media attempts to subliminally train the public in this knowledge.  The initials T.R. (20-18) are actually extremely common. As a catalyst, T (20) gives R (18) strength. The combination of the 20th and 18th letters also implies strength to the important intersecting 19th letter S.  S (19) is a letter prescribed great power  because it symbolizes ideas which the oligarchy wish to support.  The individual symbolism of T and R is still relevant, however the statement made is greatly related to S.  To illustrate, here are some very popular examples, chosen with specific intent by their Illuminati controllers:

The reverse of T.R. (20-18) is R.T. (18-20) and is used less frequently ("Ruby Tuesday", Rotten Tomatoes and Real Time with Bill Maher).  The wonderful thing about the code is that we can logically infer rules based upon how we comprehend usage.  If R.T. is less common than T.R., then there must be reason for it.  S (19) is a among the strongest letters in the alphabet and would never be belittled.  We can guess that R.T. somehow prescribes S less strength than T.R. does.

We know that the code prefers to ascend rather than descend the alphabet when moving between adjacent letters.  The pairing F.G. (6-7) is far more common than G.F. (7-6), and R.S. (18-19) is much more common that S.R. (19-18).  For example, there is Rubber Soul, Real Steel, Red Sonja.  The pairing T.R. descends, however not between adjacent letters.  So, based on these observations we can hypothesize why R.T. is less common than T.R.  The pairing containing R and a nearby letter which is most frequent is R.S.  Using R.T. creates competition with R.S., which is counterproductive because we know R.S. fits the code precisely.  Hence, R.S. and T.R. are pairings exclusive of each other which both contribute to the sophistication of the code.

The bard's name also translates interestingly according to the code.  William Shakespeare moves to W.S. (23-19), a vital pairing.  W (23) and S (19) are two of the strongest letters as the code is used.  They are "3" letters because they possess a multiple of 3 according to their place in the alphabet. W is the Legion's letter, representative of the death clutch of permanent victory they hold over the masses.  S is similarly superlative.  The W.S. pairing is an important statement on the world as it exists.

People postulate upon what event will mark or has possibly already marked the dawning of the New Age.  If a new historical era is truly upon us, one must hope that Earth hasn't already passed into that epoch, judging by the current state of affairs worldwide.  While some minds are as open as ever, fueled by new information and knowledge, others have reacted perversely to the awakening and closed themselves off entirely.  There has been no event which we can see clearly has ushered us forward into the future.  We can be sure that when the New Age truly arrives, all will understand and appreciate the universal and cosmic truths which are contained within Sacred Numerology and Supreme Mathematics.

This subject, "The Code", can appeal to everybody, all ranges of people, from the poor to the rich, from the least to the most educated.  At its core, the Illuminated Code is easy to understand, as it is based on a single idea.  The above analysis, conversely, is extremely esoteric.  It is difficult to understand, and honestly, difficult to explain.  Every reader should keep an open mind.  If you give it a chance, personal intellectual gain will occur.  There is great importance in sharing this information.
Email ThisBlogThis!Share to TwitterShare to FacebookShare to Pinterest
Newer Post Older Post Home